Pick Your Own Update: 10/18/2020  ~ Advance tickets are recommended for weekend guests.  We are sold out for Sunday 10/18!
Admission includes access to the Corn Maze, Pumpkin Patch and Play Area. 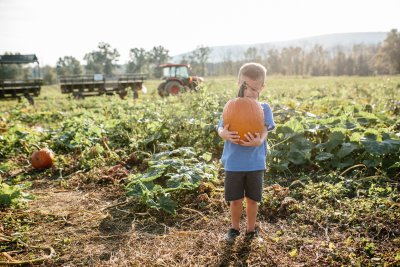 Get Pumpkin Picking Details & Tickets    Our Apple Orchard is closed until November when late season apples are ready for picking.

Confession: I sometimes drink Naked because those labels make inspiring claims about the number of berries or papayas or leaves of spinach that were crushed to make the liquid in each bottle. And because the liquid tastes pretty good and it fills empty stomach space more effectively than orange juice. And because the price makes the liquid seem valuable. (I know the link between price and value isn’t solid, but I admit to accepting it when the stuff I’m pouring into my gullet needs to make me feel better about myself.) 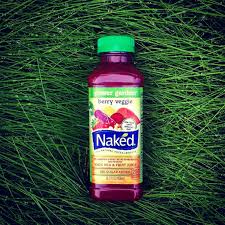 “Mother Nature gave us some pretty great stuff to play with —” (And how!)

“and the best part is, it’s all good.” (I’m suspicious of that last phrase; it’s the kind of language that erases realities by denying them: not all is good.)

“And given our name is Naked, it’d be pretty lame to cover up the wonderful taste of Earth’s delicious bounty with artificial flavors or added sugars. So every time your body is craving refreshing, delicious fruits and veggies, you can be 100 percent sure that every Naked product is providing you with just that. And that’s our Naked Truth!”

So imagine my surprise when I learned that Naked’s owner spent $2,485,400 on  lobbying efforts to defeat Proposition 37, a ballot proposition which would have required that all genetically engineered food sold in California be labelled as such — and would have forbidden attaching the word “natural” to any of that great stuff nature gave us if “playing with it” meant altering its genome.

I got that naked truth from The Cornucopia Institute, a nonprofit public interest group devoted to “promoting economic justice for family-scale farming” and “supporting the ecological principles and economic wisdom underlying sustainable and organic agriculture.” 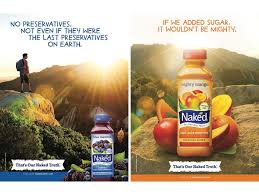 Cornucopia’s coverage of the GMO labelling struggle shows that Pepsico, the company that owns Naked, was second only to Monsanto in its effort to keep food labels in the nebulous realm of don’t-ask/don’t-tell.

Not exactly the naked truth.

Cornucopia’s research does not suggest that Naked extracts juice from genetically engineered plants, but it does reveal that the company’s public face is selectively crafted to please its 973,000 Facebook friends — as well as people like me, who liken Facebook to the emperor’s new clothes.

It also shows that most items for sale in grocery stores, thousands and thousands of products which look like the fruits of a far-reaching diversified food system, are traceable to a handful of giant corporations, some of which would rather we not know they own the brands we’re buying. Other food-makers with potentially embarrassing parents include: Odwalla (Coca Cola), Kashi and Bear Naked (Kellog), Annie’s Homegrown and Cascadian Farm Organics (General Mills), Horizon Organic and Earthbound Farm Organic (White Wave Foods), and Burt’s Bees, which is owned by Clorox. 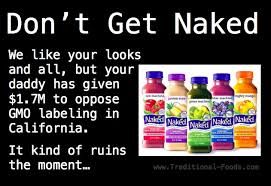 All of which adds another dimension to the question ‘Who’s your farmer?’

Great Country Farms supports The Cornucopia Institute in part because that question matters to them, and their work makes it easier to answer.

We thought you might like to get acquainted with the creature that helped itself to some of your peaches-and-cream sweet corn this summer: corn earworm. 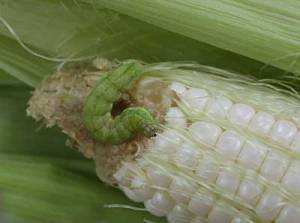 According to the Cooperative Extension at North Carolina State University, corn earworm is pervasive in the Western Hemishpere. It feeds on more than 100 different species, but its favorite food is corn. The guys who stole our kernels this summer were earworm larvae, which emerged from tiny eggs laid by the adult version of this creature, the corn earworm moth.  In our neck of the woods, “corn earworms overwinter as ‘resting’ (diapausing) pupae in soil at a depth of more than 5 cm,” NC State reports. “Adults emerge in early May, mate, and seek suitable oviposition (egg-laying) sites. A high percentage of first generation eggs are laid on the leaves of seedling corn when it is available.” 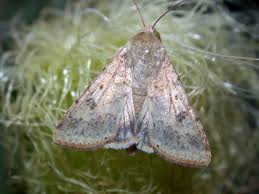 Not a little wormie anymore.

Each female moth lays up to 3,000 eggs, one at a time, and each egg becomes a little wormie fellow. Despite those numbers, you probably never saw more than one green caterpillar on any of your ears of corn because the biggest of the nasty buggers eat their little brothers and sisters before they settle into veganism, which they practice for two or three weeks before digging into the dirt to pupate themselves. They grow wings underground, then they emerge, lay eggs, and the cycle starts again. In a Virginia growing season, that cycle repeats itself at least three times.

Earworms aren’t the primary target of the genetic modification that causes most American corn to produce the bacterium B. thuringiensis subsp. kurstaki, also known as Bt; that technology is aimed at rootworms, which eat from below, not from above; but the protein Bt makes is bad for all lepidopteran caterpillars, so a lot of earworms do succumb to its charms. However, most conventional sweetcorn growers control earworm with applications of Mustang Max, Warrior, or Capture/Brigade, all of which are toxins belonging to the pyrethroid group.

“For many years the pyrethroids have provided exceptional levels of control of earworms,” Purdue 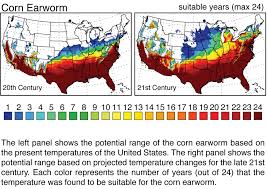 University says. However, “in recent years, there have been scattered reports of pyrethroid failures in small plot trials and in commercial fields. Recent research has shown that populations of earworms collected in Indiana and Illinois have low to moderate levels of resistance.”

And there’s the rub: when every female lays thousands of eggs, and three or four generations of females lay their thousands of eggs every summer, it doesn’t take long for the gene pool to change.

The corn we grow doesn’t produce Bt, because the seed hasn’t been genetically modified to do so, and we don’t spray the ears with Mustang Max or Warrior or any other pyrethoid because

“While pyrethroids may be amongst the least toxic of insecticides, they are an excitatory nerve poison, acting upon the sodium ion channels in nerve cell membranes:

It seems better in the long run to share a little of our corn with worms.

Come find the perfect pumpkin, challenge the corn maze and play in our 12 acre farm play area! Advance Tickets are REQUIRED for Saturdays, Sundays & Columbus Monday to guarantee access due to COVID safety limits on attendance ordered by Gov. Northham. Pumpkins sold separately and NOT included with admission. Our Apple Orchard is CLOSED until Nov.

Pick your Own Pumpkins

Tickets are SOLD OUT for Saturday, 10/10 & Sunday 10/11 and we cannot accept walk-in guests due to attendance limits imposed by our Governor.  Get your advance tickets today to guarantee access for your family to the farm play area and pumpkin patch for before they sell out as well!

Pumpkins are sold separately and NOT included with your admission ticket.