The Farm is closed for the season.   The Bakery & Farm Market open weekends starting March 4, 2023.  Get your Fan Season Pass Today so you don’t miss a minute of Family Fun on the Farm! 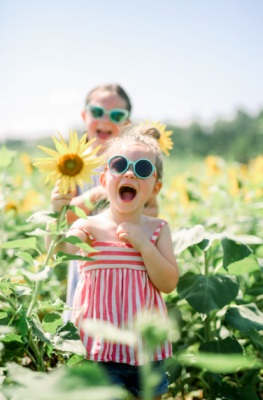 It was feeding time when I arrived at Spring House Farm for a visit, so I put on a pair of muck boots and followed Andrew Crush to the breakfast trough. “Careful of that,” Andrew said, stepping over the electrified wire that encloses the woods where his Mule Foot, Large Black, and Ossabaw pigs live. I marveled that the wire was only a foot off the ground, and then I realized that pigs don’t jump.

Andrew’s pigs have the best of both worlds. They enjoy the benefits of life in the woods — exercise, fresh air, access to wild forage — without the hassle of constantly searching for food: Andrew brings them one square meal of corn, barley, roasted soy beans, and minerals every day.

“Unlike most other animals,” Andrew says, “pigs absorb the flavor of the food they eat. We keep our pigs on pasture until they reach about 100 pounds, and then they’re on the mountain for the rest of their life, foraging on all kinds of things that put a unique flavor on the meat.”

“This is Sargent Major,” Andrew said.  The big boar was asleep with a couple of sows, but they roused themselves at the sound of Andrew’s voice. While the sows lumbered into the woods, Sargent Major rubbed his side against Andrew’s legs, like a 400-pound dog. “He’s living the dream,” Andrew said, meaning that Sargent Major is a breeding boar, so his job is impregnating sows.

Sargent Major is a cross between the Ossabaw breed and the Large Black, which is bigger and more docile than the Ossabaw. He and his co-worker, Mack, who is also a hybrid, father about 130 piglets each year, all of which are pasture raised and forest finished. Half of Andrew’s pigs go to members of his CSA, and the rest go to a handful of restaurants in Washington which are committed to the practice of using an entire animal. “I used to sell a belly here and a ham at some place 50 miles away, but that got yo be crazy,” Andrew said. “Now it’s the whole hog or nothing.”

Andrew has animals on several parcels of land in Loudoun County. In addition to the main Spring House Farm location near Lovettsville, he runs cows on 250 acres near Waterford, and he has goats and pigs on 80 acres in Neersville, where he also operates a butcher shop.

“Our livestock management philosophy is simple,” Andrew writes on the Spring House Farm website. “Tender meat is directly related to the amount of time any animal stays in one specific area. We operate on a rigid pasture rotation to allow the animals to consume as much fresh green growth as possible. Quickly moving them to a new area allows the forage to rest and grow. Our pastures consist of alfalfa, crimson clover and other grasses. In the fall, the hogs are moved into hardwood forest to feed from acorns and other forage. Although the majority of their diet is provided by grazing in the pasture and forest, we do supplement with several different grains and soy — always hormone-, antibiotic- and steroid-free.”

All of Andrew’s pigs are heritage breeds, but the Ossabaws are especially notable. The breed is basically feral. They’re said to be descended from a species of pig named Iberico, which Spanish mariners installed on Ossabaw Island because it was covered with acorns, and that’s what the pigs had eaten back in Spain. Hams from Ossabaw pigs are among the finest available anywhere, but meat is no longer the only reason people are interested in Ossawaws: because the breed has lived and reproduced in isolation for five centuries, its genome has begun to attract attention as well.

The cyclical nature of the food supply on Ossabaw Island forced the pigs to do something like what bears do: stuff themselves in the fall and then survive the winter on little more than body fat, except instead of hibernating, they continued to roam and forage, trimming down little by little during the months of famine, and then packing it on again in summer and fall. Well, researchers have discovered that if you move those pigs indoors and feed them a steady diet of corn — that is, if you put them in the sort of confinement feeding operation that produces most of the 120 million pigs Americans eat every year — they develop type-2 diabetes, almost all of them.

That fact has piqued the interest of doctors investigating the recent explosion of type-2 diabetes among human beings, especially among children, many of whom eat a lot of processed food and spend most of their time in a chair, which makes them fat.

“Because young children who are obese are more likely to become diabetic when they’re older, experts are paying particular attention to how much — or how little — pre-adolescents eat and exercise,” Chris Woolston writes in Health Day. “Disease researchers at the Centers for Disease Control and Prevention (CDC) made the prediction that one in three children born in the United States in 2000 will likely develop type 2 diabetes sometime in their life unless they get more exercise and improve their diet.”

Have Ossabaw pigs evolved some mechanism that allows them to pack on body fat without developing type-2 diabetes, as long as they’re allowed to roam and forage? Does some genetic variation prevent them from developing insulin resistance? Or will studying them simply confirm that sitting on our butts eating junk is a recipe for chronic disease?

I didn’t expect questions like that to arise from a visit to a local sustainable farm. The fact that I wound up asking them shows how far the principles of sustainability reach, and how much living well depends upon them.

Get Unlimited Farm Admission with a 2023 Season Pass

Join us for our 30th Anniversary season with a FAN of the Farm Season Pass and your immediate family can come pick & play as often as you like!