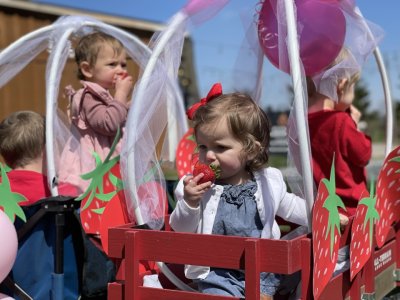 Close
Of all the things to protect, why butterflies? For their good looks? For their symbolic value as things that undergo dramatic change inside cocoons?
Yes.
And because they’re good pollinators.
But the Loudoun Wildlife Conservancy suggests that monarchs are also canaries in the

contemporary coal mine, meaning that their death should signal us that we’re in danger ourselves. And monarch populations have declined 80% in the past twenty years, largely because monarchs depend on a plant family that people don’t like: milkweeds. They grow between rows of corn and soybeans in the Great Midwest, and they send out those cottony seeds that float from one row to another, from one field to another, from one county to another, spreading milkweeds everywhere. According to insect ecologist Chip Taylor, of the University of Kansas, farmers used to control those weeds with a tiller, which chops weeds and turns the soil without disturbing crops. “The milkweed survives that sort of tillage to some extend,” Taylor says. “So there may be 20, 30, 40 plants per acre out there, enough so that you could see them.”
Not anymore.
Since 1996, when the Monsanto Corporation began engineering corn and soybeans that tolerated repeated applications of its Roundup herbicide, most large-scale farming in America has shifted toward those products — and thus shifted away from weed-control practices that afforded milkweeds a modest survival rate.
Lincoln Brower, a biologist at Sweet Briar College, says that there 108 different species

of milkweed in the United States. “The whole monarch migration evolved in relation to this milkweed flora,” Brower says, and recent studies show that 60% of those plants have been eliminated from the grassland ecosystem of the midwest. “We’re not talking about one species,” Brower says. “We’re talking about an entire native flora being eliminated.”
Herbicides kill not only milkweeds, where monarchs lay their eggs, but also wildflowers which provide the nectar adult monarchs need to survive. Brower says that between the time they emerge from the chrysalis and the time they head for Mexico, adult monarchs pack on 100 mg of fat, all of which comes from wildflowers. Without that fuel, they can’t make the trip.
So one answer to the question why butterflies is that we don’t have to revamp the whole

system of American agriculture to help them recover. All we have to do is plant a few milkweeds and nectar sources in our gardens. Great Country Farms has joined the Loudoun Wildlife Conservancy’s “Keeping the Magic Alive” campaign by establishing a monarch way station here on the farm and designing a butterfly tour option for visiting school groups to help children and their teachers understand the plight of the monarch.
To join the campaign in your own back yard, visit the Loudoun Wildlife Conservancy’s website.

3e+10. That’s the number my calculator gave me when I tried to figure out how many flowers Bill Bundy’s bees might pollenate each day.

Bundy tends 100 bee hives, which are widely distributed throughout western Loudoun and eastern Clarke counties. Eight of them are here at Great Country Farms, and a dozen more are across the Shenandoah River on the Cool Spring Farm fields where we raise a lot of our vegetables. At this time of year, the population of each hive is about 60,000 bees, Bundy says, and each of them might visit as many as 5,000 flowers per day, according to the website Wonderopolis.

If you run those numbers, you get something like this: a hundred hives times sixty-thousand bees equals six million pollinators, each of which might crawl in and out of five thousand flowers a day.
I had hoped to translate those numbers directly into strawberries — a number of strawberries that can only be written abstractly — but it turns out that strawberries can pollenate themselves, to some extent, because each blossom contains both male and female organs, so wind and gravity will transfer enough pollen to turn many blossoms into fruit. If you want a bumper crop, however, you need bees.
And some crops won’t come in at all without bees: apples, apricots, cherries, nectarines, peaches, plums, blueberries, raspberries, melons, pumpkins, squash, zucchini — all of those rely on insect pollinators, the most effective of which is the honey bee.
Bundy came to bee-keeping via the mechanism that leads many married men to their vocation: his wife. She wanted to

raise sheep and make yarn, so in 1996 they bought a small farm in what was then still rural Loudoun County. The farm next door, it so happened, was managed by a guy named Billy Davis, who was one of the founders of theLoudoun Beekeepers Association, which offers bee-keeping courses and a wealth of information about every aspect of the craft.

“He convinced my wife to attend one of his classes,” Bundy said, “and she dragged me along. Before long, she dropped out, and here I am almost twenty years later with a hundred hives. I teach that class now.”

The class meets two hours a week for six weeks, and it covers essential information for novices, including equipment, woodenware, bee biology, seasonality, plants, nectar sources, pests, and diseases that might effect a colony of bees.

Bee diseases have been in the news a lot lately because a phenomenon calledColony Collapse Disorder has destroyed some ten million hives in the past six years, eighty to ninety percent of the wild bee population in America, by some estimates. In a report released a year ago, the United States Department of Agriculture asserted that, “currently, the survivorship of honey bee colonies is too low for us to be confident in our ability to meet the pollination demands of US agricultural crops.”

Todd Woody, writing for the website Quartz.com, reports that sixty percent of the honeybees alive in America today have to be trucked to California’s Central Valley to pollenate just one crop, almonds, which don’t produce at all without the help of bees.
The problem seems to be that flowers are absorbing fungicides, pesticides, and other chemicals, and they’re passing them on to the bees that eat the flowers’ nectar and feed the flowers’ pollen to their young. Those chemicals in turn seem to weaken a bee’s resistance to a parasite called nosema ceranae, which can decimate entire hives of bees with compromised immunities.
Bundy thinks the media hyperbolizes the problem by coining terms like “Beemageddon,” or “Bee Apocalypse Now,” and by writing headlines like “Scientists Discover What’s Killing Bees and it’s Worse Than You Thought.”
Maybe so.
Bundy’s response to the problem isn’t hyperbolic, it’s holistic: he initiates fifty to sixty people every year into the fellowship of bee husbandry, and he creates twenty-five to thirty new bee colonies every year and sells them to new keepers, many of whom maintain their hives in this region.
He also produces up to two tons of honey every year, some of which we sell in the farm store. On Saturday, May 17, Bundy will bring a honey extractor to the store and show us how that process works. Come and see.

The Farm Play Area is Open!

I want to Visit for a Day in April!

I want to visit the Farm!

Who’s YOUR Farmer? We are committed to growing, producing and sharing good food with good people, so that’s where you come in. Skip the trip to the grocery store and tackle your list locally with sustainably sourced produce from your farm. Shop the Farm Market to hand select your bounty or enjoy shipping to your doorstep. Getting your kitchen in sync with the season is only one benefit of this sustainable subscription.Join the Market Club

Harvest the best of all worlds as a MEGA Member. The sky’s the limit when you come Pick & Play as often as you like and shop the Farm Market on site or from the convenience of home when life gets a bit too crazy for a farm visit. Fan & Market Clubs are combined in one easy subscription. Pick, Play, Market… It’s all waiting for you to flourish and nourish your family.