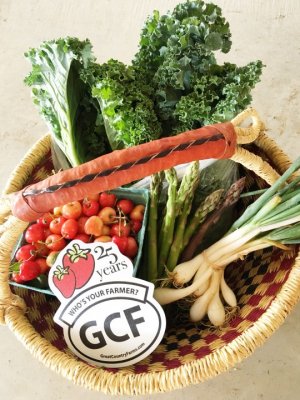 American industrial agriculture may be standing in the way of international cooperation.

“In the United States, they put anything in their mouths,” Jean Cabaret, an organic farmer who lives in the region of France known as Brittany, recently told a reporter for The Washington Post. “No, this must be stopped.”

Jean Cabaret and his unwashed chickens.

‘This’ is the Transatlantic Trade and Investment Partnership, an agreement that would link the economies of the United States with those of the 28 nations comprising the European Union more intimately than ever before. The horse of globalization is already out of the barn, right? Why not hitch it to your cart?

Because doing so might drench your chicken in the chemical that keeps your local swimming pool from incubating all the nasty stuff that washes off of other people’s bodies: chlorine, which was recently used to thwart the annual Midwest FurFest Convention, prompting the evacuation of a Hyatt Hotel in suburban Chicago, and sending 19 people to a local hospital.

According to The Washington Post, “passage of the Transatlantic Trade and Investment Partnership (TTIP) could be a globalization milestone, creating a megamarket of 800 million consumers from Alaska to Finland, Hawaii to Greece.”

Isn’t that a good thing? Wouldn’t it create, like, millions of new jobs, both here and in the many European countries whose economies are in worse shape than ours? Maybe, but it would also end Europe’s ban on American “Frankenfoods” — genetically-modified, hormone-boosted, or chlorine-sanitized products most Americans eat every day.

A lot of people on the far side of the pond want to keep that ban in place: last week an online petition opposing TTIP garnered its one millionth signature, a number that forces the European Parliament to hold a hearing on the matter.

“Most of these concerns about chemical use and those kinds of things are blown up in the media to become a problem that really doesn’t exist,” Scott Russell, a professor of poultry processing at the University of Georgia (who would have guessed that poultry processing had its own professoriate?), told National Public Radio back in September. Russell reports that the American poultry industry uses only one capful of chlorine per gallon of water, and the chemical poses no health threat because it gets rinsed off the chickens (with unchlorinated water?) before they’re sold to us.

“We’re not trying to force anybody to eat anything,” Michael Froman, the U.S. trade representative, told The Washington Post. He just believes that “the decision as to what is safe should be made by science.”

But safety may not be the motivating factor here — it’s probably money. According to a study by a Dutch university, it costs the American poultry industry about 80 cents to make a pound of chicken, while European chicken growers, who can’t use chlorine or hormones, have to spend a dollar. How long can principles hold out against a profit margin differential of 20 percent? Passage of TTIP wouldn’t force Parisians to eat Purdue chicken, of course, but it may price Jean Cabaret’s birds right out of the market.

The pool at Franklin Park may offer safer swimming than Stoney Creek, but I don’t go to Stoney Creek to swim in safety. I go for the drive, and for the climb up the back side of that cliff with the jumping ledges at three different levels — high, scary, and I’ve-never-tried-the-top-one. It’s true that the last time I was there my dog pooped in the water, but he was on the other bank and the turd floated downstream pretty fast.