Order honey, donuts, pies, eggs and more from our new on-line market and we will have your order ready for pick up! 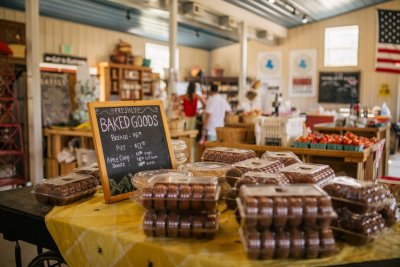 “Nature has many unknowns,” said the well-combed man in the black glasses and the

avocado/boysenberry tie, “but one certainty is that tomatoes and fish do not have sex with each other.”

He paused to let me digest that statement. Then he said, “They never have.”

If that doesn’t make you swallow your caramel corn and sit up straighter in your chair, then I don’t know what will.

The man assuring me that bass do not deflower Brandywines is John Donvan, host and moderator of the Intelligence Squared debate series, and he’s priming me to watch an exhilarating 90-minute argument about the dangers and the benefits of Genetically Modified Organisms. Donvan leads with the fish-tomato sex idea because it drops your jaw — and also because, as he explains, “one of the most famous, or some might say infamous, feats of genetic engineering was the development of a tomato whose DNA was mingled with the DNA of a fish, which gave it longer life on the vine.”

I came across that debate thanks to an article in Grist entitled, “Finally, a GMO Debate Without Shouting,” and since that seemed almost as unlikely to me as a fish making moves on a tomato, I clicked on the link.

I have my own attitudes and inclinations on that issue, and I know from experience that explaining them to someone who inclines otherwise causes my voice to rise and my face to flush with blood. That’s because I don’t know why I think what I think well enough to explain why I’m right once the discourse shifts into capital letters — I JUST KNOW THAT I AM!

“The moderator, John Donvan, pulled off a small miracle in crowd control,” writes Nathanael Johnson, “cutting off participants when they strayed from the point. The result was that each side actually had to concede those points that their opponents had gotten right, rather than making a swift lateral move to another subject.”

It’s an issue that seems to encourage entrenchment. “One view, especially prevalent in Europe,” Donvan writes, “says we are crazy to be doing this.” That is, crossing tomatoes with fish. “The other view says: humans have been fiddling with food genetics forever, and this route to improved food products represents only a slight variation on an old practice. The core questions are: is this food safe, is it beneficial, and is it necessary?”

If you think those questions are important — I do — and you have some open viewing time, maybe you’ll watch this debate. I plan to watch tonight and report on what I learn tomorrow. Maybe we can use the comment section under this post as a forum for discussing what we learn.