Come Pick & Play on the Farm!

Join us for Peach Picking Today! 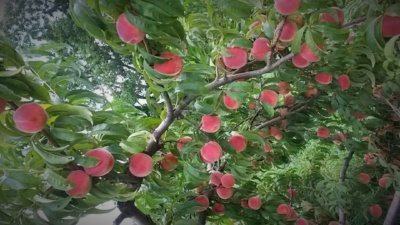 Get Tickets to Pick & Play Today!

Plats of wheatgrass in the greenhouse at Great Country Farms.

A small but passionate group of juicers believes that wheat grass has remarkable healing powers. Some say the chlorophyl acts like concentrated hemoglobin. Some say it’s distilled solar energy in drinkable form. Some say it will clean your mitochondria and fill the holes in the walls of your cells.

According to one source, wheatgrass juice contains 19 amino acids and more than 90 minerals, which may be why it’s touted for a broad spectrum of health benefits, from stimulating circulation to preventing tooth decay. It seems to work primarily by increasing the level of oxygen in your blood and reducing inflammation and toxic waste.

“Wheatgrass is one of the most potently healthy substances on earth,” asserts Ross Bridgeford, author of The Alkaline Diet “…Since I’ve been using wheatgrass I’ve noticed my energy levels go sky high, my skin clear up, and colds, coughs and illnesses disappear forever.”

“If we look at oxygen as a bullet to kill cancer cells,” argues researcher Webster Kehr, “then we should look at wheatgrass as a shotgun blast at treating cancer. The number of ways it deals with cancer is incredible. First of all it contains chlorophyll, which has almost the same molecular structure as hemoglobin. Chlorophyll increases hemoglobin production, meaning more oxygen gets to the cancer. Selenium and laetrile are also in wheatgrass, and both are anticancer. Chlorophyll and selenium also help build the immune system. Furthermore, wheatgrass is one of the most alkaline foods known to mankind. And the list goes on.”

Nevertheless, as Bridgeford notes, “for some reason [wheatgrass juice] is still not mainstream.”

That reason may be that the list of benefits ascribed to its consumption is so long and so dramatic that it’s hard to believe.

I threw back my first shot of wheatgrass juice five years ago at a hippie coffee shop in Shepherdstown WV. It was the end of a long day, and I didn’t think I’d make it home without a dose of the working-man’s vitamin C, caffeine, which was available in concentrated form as espresso or in the 16-ounce timed-release style. I chose the latter.

“If you want a real energy boost,” the floppy-hatted owner said, “you should try wheatgrass juice.”

He must have been able to tell that I used to wear a feather earring.

I asked what manner of beverage that might be, and I settled in for a spiel, the details of which I no longer recall, but its convincing power was doubled by a woman who slipped through the door in the middle of it, nodded to the man behind the juicer, and stood patiently while he snipped grass from a flat tray and cranked it through an auger. After naming a few of the elixir’s more believable, easier-to-swallow virtues, he held up a glass of thick, green fluid — really thick and really green.

“Most people start with half a shot and work up to a whole one gradually,” he said, at which point the woman reached past me, took the glass, gulped the fluid down, and passed the glass back to the owner, who set about filling it again.

She explained that before she started drinking wheatgrass juice she’d suffered from some chronic ailment — I don’t remember what it was — which nothing had relieved, except the wheatgrass juice. “It changed my life,” she said. Then she drank her second shot, gave the owner a five-dollar bill, and slipped back into the night.

I told the floppy-hatted fellow to set me up.

The skeptic in me wonders if the green elixir really changed that woman’s life or if her life simply changed when she began to drink the green elixir. But the part of me that I prefer, the hopeful part, is shopping for a juicer.

Need to Change your Tix?

Life Happens and plans change. Login with the email you used to purchase your tickets to update your tickets. Manage my GCF Tickets