We are CLOSED for the season.  Join us Opening Day, March 27, 2020 for a whole new season of Family Fun on the Farm!  See you in the Spring!! 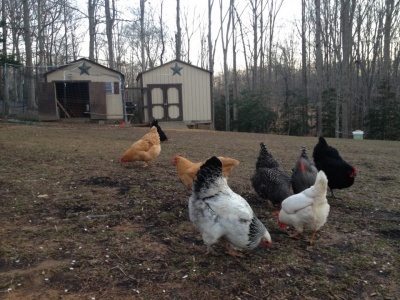 Note: Bee Still Farmette is our only service point in the Manassas area.

I’ve decided to trade in my farm boots for a lab coat for the day. We’ve had our chickens now for about a year. I rave about our eggs, and we have a small following of faithfuls who regularly purchase our eggs, but I wanted to see if they’re really different from confinement eggs.

So once I got over cheating on my chickens, I hauled it to the store and bought your regular package of eggs — $1.47 I think. I knew they were from confined chickens because they were cheap and the package said nothing about being free-range or cage-free or pasture-fed.

Confinement Eggs come from chickens that spend their lives in cages. Some cages are large enough to accommodate the chicken’s needs and keep the chicken safe. Some cages, however, are overcrowded and simply facilitate egg production with no real regard for fostering a the chicken’s welfare.

Free-Range Eggs come chickens that have the freedom to roam and eat what appeals to them. Instead of getting all their vitamins from feed, they eat plants and bugs and worms and even little frogs.

Bee Still Farmette eggs come from chickens that have a coop and a safe chicken run, but I would consider them free-range because of the many hours they spend roaming in the woods and yards of our property. When not foraging, they eat an organic layer-pellets. We don’t do any cracked corn because I’ve had a hard time finding anything that’s non-gmo. We give them occasional treats of sprouts and veggie scraps. And they are a key component to our garden success, tilling, weeding, de-bugging and all! 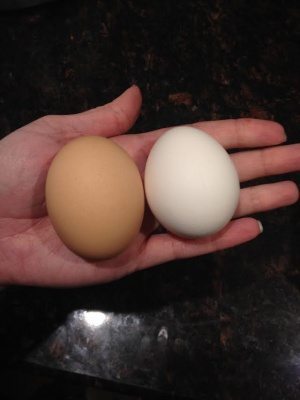 In all honesty this one really isn’t an experiment, it’s just nature. Different chicken breeds produce different colored eggs. We even have some eggs that have spots on them! So, eggs of one color are not necessarily better than eggs of another color. 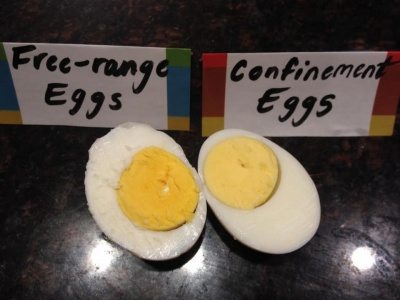 On first glance one might think, “Oh, look! Confinement won this one!” Let me explain why the free-range egg was more difficult to peel and thus looks like a large white pruney mess. No google needed for this one! This explanation comes from Grandma! Confinement eggs take time to get into your hands, they are, simply put, older. Our free-range eggs came from the farmette that morning. So Grandma explains that as the egg gets older the slimey layer under the shell becomes less strong, making it easier to peel. She says if you want a pretty hardboiled egg you always have to use an older egg.

So, by my observation, there’s no real difference between the whites of the free-range eggs and the whites of the confinement eggs. But, the yolk — oh that is a different story! The yolk is deeper in color, its hue is richer, and it just has to taste better and be more packed with vitamins.

Experiment 3- Free-Range vs. Confinement in the raw

Nothing fancy here, I just cracked the two types on a plate to be compared. 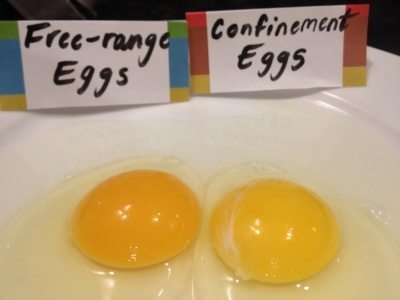 Through observation one might observe again that the free-range egg is richer and darker in color. Thus, making it  taste yummier!

Let me just point out that this experiment was done in winter. Meaning, the chickens have less of a natural food supply and fewer opportunities to free range (we just received 30 inches of snow and the girls were too “chicken” to venture out in the snow drifts — who can blame them?) So, dare I say, the yolk would probably be even richer in the summer months.

So there you have it! I am no real lab tech or nutritionist. I don’t even have a farm — it’s a farmette! But I can say with certainty that I would much prefer to feed my family free-range eggs over confinement eggs.