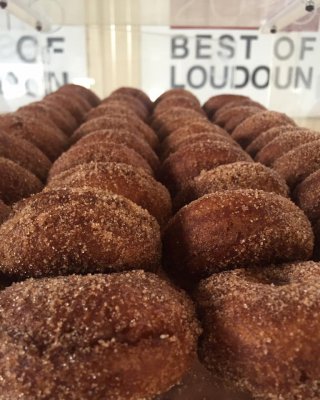 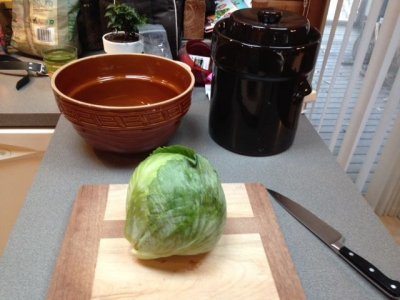 I’ve been wanting to do this ever since I first made friends with lactobacillus, but I’ve been dragging my feet. Smiling at a milky-sounding bacteria is one thing, whereas cultivating it in your kitchen is something else — that takes a push from a friend. My push came in the form of a fermenting crock from Humble House — that’s the tall thing on the right in this picture. You don’t have to have one of those — a big jar or any number of other vessels will work — but a nice crock has so much tool-appeal that you’ll be eager to use it. Thanks, Kate! You also need a heavy bowl and a knife that’s sharp enough to hold its line all the way down to the cutting board.

Here’s a way to think of what you’re doing: you’re trying to create an environment where beneficial bacteria like lactobacillus can infect your vegetables but toxic bacteria cannot. The first step in that process is getting a vegetable like cabbage to release the 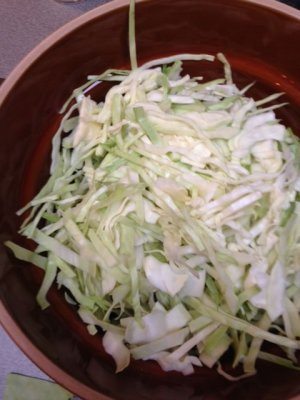 water stored in its cells. You do that by slicing it into thin strips, sprinkling the strips with salt, and then squeezing them. The book Fermenting Vegetables, which we carry in the market, invites you to massage the salt into the cabbage, but to me it felt more like squeezing the water out. It takes some hand strength. As you break the cell walls, the cabbage will get wet and shiny, and eventually a puddle will form at the bottom of the bowl. That’s brine. You need enough of it to cover the cabbage, because lactobacillus can tolerate the salty water, whereas toxic bacteria can’t.

The book has fermenting recipes for 64 different vegetables and herbs, ranging from common items like cabbage to things most of us don’t eat, like dandelion greens, which are supposed to be really nourishing. I stared with curtido, which is a Salvadoran relish based on cabbage, onion, and carrot, with oregano and cumin thrown in. If you’ve ever eaten pupusas at the kind of place where only the kids speak English, curtido is the stuff they put on the side of the plate. With pink Himalayan salt, this is how it looked before I started squeezing: 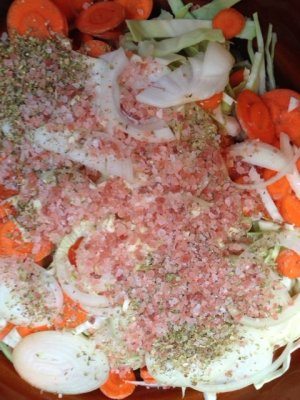 So, why weights? As I understand it, lactobacillus produces carbon dioxide, and you want to make sure none of that pushes the vegetable material up out of the brine.

My first batch is 24 hours old now, at 3:00 p.m on January 18. The fermentation range for curtido is between four days and two weeks. The instructions say to open the crock every day and tamp the cabbage down to keep it submerged, and to start tasting after day four. I’ll let you know how that goes!